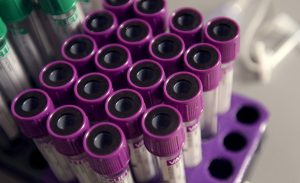 It is currently unproven whether such a test, based on measuring inflammation, would improve treatment outcomes.

Previous research has suggested high levels of inflammation – which is not just a reaction to infection, but can also be caused by stress – may impair the beneficial effects of antidepressants.

Researchers screened blood samples from people with depression who had, and had not, responded well to antidepressant medicines in the hope of identifying molecules associated with inflammation and drug response.

They then used this information for a second group to see if they could predict who would and wouldn’t respond to treatment with antidepressants.

A significant proportion of people were correctly identified as responders and non-responders, which is a big step forward compared with current practices.

But the test also missed 39-43% of non-responders, meaning they would continue to receive antidepressant treatment that is unlikely to work for them.

The study also only looked at drug treatments, and did not assess talking therapies such as cognitive behavioural therapy.

This approach certainly seems to be a step in the right direction, but it needs refinement before personalised treatments for depression can be practised with confidence.

This site uses functional cookies and external scripts to improve your experience.

NOTE: These settings will only apply to the browser and device you are currently using.

If you require to contact us we will need your name and address, this is stored so we can get back to you.